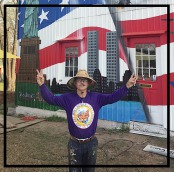 Chris Opp has used a variety of colors in his numerous murals throughout the ArkLaTex, but the three most meaningful colors for him are red, white and blue. Among his numerous projects over the past few years, he has painted eleven patriotic murals with a prominent image of the American flag.

The Bossier City artist has been interested in patriotic artworks since the 1970's. Chris shares, "I'd seen a guy that traveled around the United States, especially in the Corn Belt area, painting American flags on top of barns and on the side of barns. I thought that would be pretty cool. Now I'm painting it in my town, Bossier City, Shreveport and now out in East Texas."

Opp completed this 2,500 square foot painting in June, 2017. He shares, "The whole idea of The Great American Mural was about our service personnel, paying tribute to them. I'm utilizing my talent by bringing color into this part of the world."

Learn more about Chris Opp and his artwork at ArtisticShark.net.

Information courtesy of the Shreveport Times.

There are no entries yet.

Visit Us in Waskom

Waskom, Texas is located on Hwy 80 in NE Texas along the Louisiana border. Access Waskom from I-20, exit Spur 156. 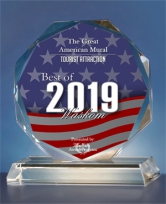